Background of the Enigma coding machine

Before and during the Second World War the German military communicated using the Enigma encryption machine. The sender used the machine to convert plain German into apparent gibberish and the receiver could only convert it back to plain German if the correct settings were used. The Germans thought the machine to be unbreakable because it has 10^23 settings, in modern terms this would be called 77-bit encryption. That sounds like a lot – and it is! The encryption of an internet connection is usually 16 or 32 bit. Still, the Enigma was cracked… even before the war broke out.

Polish mathematicians found a way of cracking the code and just before the Germans invaded Poland their knowledge was transferred to the British. Alan Turing and others helped improve a Polish design for an electronic machine that could automate the cracking (the same Turing en passant invented the computer). This made it possible to read the instructions for the German U-boats and change the routes of convoys travelling from the US to the UK, saving thousands of lives. After the war Churchill said the code breakers shortened the war by two years. 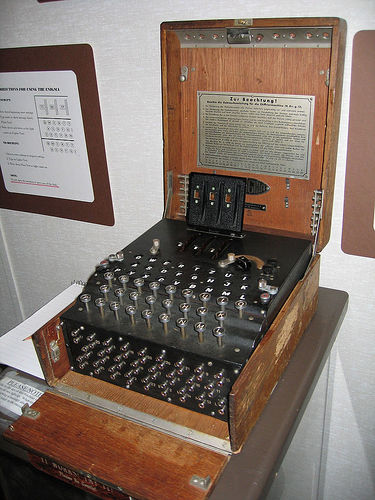 Photograph of an Enigma machine, taken in the
National Cryptographic Museum by Austin Mills

It is an inspiring story about a problem of massive complexity directly affecting the lives of thousands of people and the course of the war. It is a war story were human willpower is used to save people, not to make more destructive bombs. But it is also a dramatic story of people who were not allowed to say what they were doing for the war effort. It took until 2009 before the British government gave out a medal to the veterans, saying “We also served”. And Alan Turing? He was driven to suicide by the British government because of his homosexuality…

How the Enigma worked

The photo above shows an actual Enigma machine, the figure below shows a schematic overview. In both cases, from the bottom to the top we see a plugboard, some keys and some letters that can light up. At the top of the machine there are some rotors, in the photo these are hidden under the black cover. The wiring inside the Enigma machine. Figure adapted from Wikipedia

To see how the encryption works we’ll press a key in the figure below, let’s say “A”. The circuit closes (#2) and the signal goes through the plugboard (#3), which is not connected. The signal then goes to the entrance wheel (#4) and into the rotors (#5). The rotors have 26 contacts on each side and are wired in a certain pattern. If the signal enters at contact 1, it exits at contact 5, if it enters at contact 2, it exits at contact 19 (for example). The signal is scrambled three times (there are three rotors). The reflector (#6) is a sort of rotor, but with contacts on only one side. The signal goes another three times through the rotors and is now thoroughly scrambled and the “A” has become an “S”. The signal goes to the plugboard again, where the “S” is connected to the “D” (#7 and #8). Finally, the letter “D” lights up.

Until now it looks like a complicated way of scrambling letters. The key of the machine is in the rotors which, not surprisingly, rotate. After a key press the right motor would move a position. After a full turn (i.e. 26 letters), the middle rotor would move a position. When that has made a full turn it would move the left motor one position. The consequence is that the way the letters are scrambled changes with every key press. Pressing “A” three times will result in three completely different circuits through the machine (which doesn’t mean that there are three different letters, that depends on the circuit).

Depending on the type, the Enigma had three or four rotors and there was a choice between eight different types. A daily code book tell the operator which rotors to use and the begin setting. This is however not enough to get an astronomical 10^23 settings. This is why the military versions included the plugboard. It turns out that 10 cables gives mathematically the most combinations.

Of course, the message has to be decoded again. Thanks to the reflector the machine is entirely reversible. This means that if we had pressed a “D” in the example, we would have gotten an “A” as the result. The only thing needed was to set up the machine on the receiving end to exactly the same setting as the machine of the sender.

I don’t want to spend too much time talking about breaking the code, but here is the very short version. The key weakness of the Enigma is that a letter will never encrypt to itself. An “A” in plain German will never show up as an “A” in the code. You can use this if you have an idea what the plaintext contains. The content of weather reports are for example predictable. The Germans were also predictable: some operators always opened with “Sehr Geehrter Herr Oberkommandant” or finished with the same salutation. The English also sometimes helped luck a bit: they would lay some sea mines at a particular spot, which was then duly reported by the Germans.

The app does not resemble the original Enigma’s in any shape or form, but the functionality is the same. 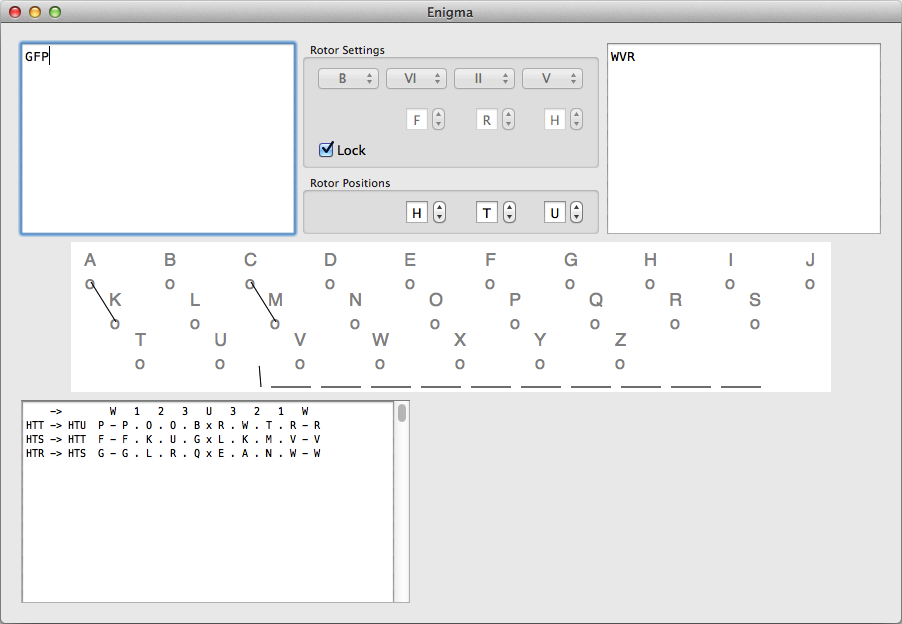 Screen shot of the Enigma app

Let’s give it a go

At the beginning of the day German Enigma operators set up the machine according to the settings of the day. This included three things.

How the individual messages were handled depended on the department and changed during the war. The explanation below is one particular method.

Set the “Rotor Settings” and plugboard as indicated in the table below (also see the screen shot).

I don’t have access to a real Enigma. I tried my algorithm on example codes and compared the results with other simulators. I think it works correctly… but I can not give any guarantees.

The app can be downloaded below. The app should work on OS X 10.5 and above, although it was only tested on 10.7 and 10.8. If you find problems, please contact me.

Invaluable resources for making the app were the following websites: