In another life I might very well have studied history instead of chemistry. I especially find the period around the Second World War interesting. A lot has already been written about the horrors of the holocaust and the bravery of the soldiers, but I am more curious about the secret part of the war and the transition after the war.

The transition after the war has two sides. On the hand hand there is the recovery of Europe. I started wondering about this after the Americans had invaded Iraq, with a disastrous aftermath. How did this go in Europe, after the victory celebrations had finished? How did the masses of displaced people find a new place in cities ruined by war?
The other transition that interests me is the one to the Cold War. It seems as if it was inevitable that there would be tensions between the US and the USSR, but was it? What happened between the Yalta conference and the building of the Berlin Wall?

With the secret part of the war I mean three things: espionage, breaking enemy encryption and the development of nuclear weapons. The three are not secret anymore, but they have been for a long time and I have the impression that their contribution is not fully part of our picture of the war, which was probably largely formed before these facts became widely known.
My interest in breaking enemy encryption is what sort of lead to me making an Enigma simulator. In this blog post I will write a bit about nuclear weapons. Whereas an interest in the Enigma might be a bit eccentric, an interest in weapons of mass destruction is, frankly, a bit weird – hence the long introduction.

My interest in nuclear weapons has grown recently after discovering the Restricted Data: The Nuclear Secrecy Blog. The blog matches quite closely to the interests I described above: how did people in this transitional period after the Second World War perceive nuclear weapons and how was this perception shaped by the secrecy surrounding the subject?
I am in the lucky circumstance that I don’t know war or violence. I fired a handgun once at a shooting range. Other than that I have no idea about the effects of guns and bombs. (1) I think that nobody can comprehend the effects of nuclear weapons. The writer of the aforementioned blog, Alex Wellerstein, understood this and made Nukemap, an overlay on Google Maps showing how much damage a nuclear bomb would do in a location of choice. 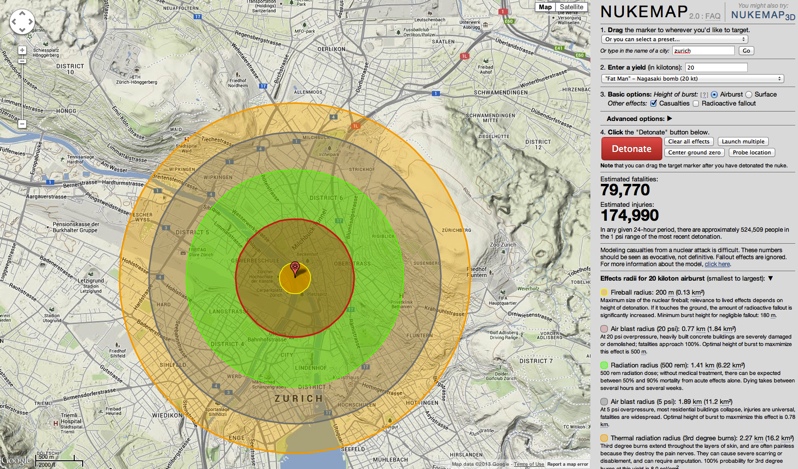 The effects of a 20 kT nuclear weapon on Zurich.

Above I “detonated” a 20 kT weapon (like the one on Nagasaki) on Zurich, just north of the main railway station. The rings show the different effects of the weapon. The center yellow is the fireball, red is the radius where most heavy buildings will be destroyed, green the radius where the radiation would kill 50-90% of the people (I live in this radius). In the blueish radius most light buildings will be destroyed (I guess this refers to American suburban houses, not the fortresses that the Swiss build). People in the orange ring would have 3rd degree burns (if they are exposed to the heat). According to the estimate almost 80,000 people would be killed and 175,000 people would be injured. The Zoo and the FIFA headquarters are however safe (right of the outer ring).
Nukemap also allows you to show the effect of fallout and some other cruel statistics. To make it even more realistic, you can also use Nukemap3D, where you can see the mushroom cloud rise above your favorite detonation place.
…
What I said, a weird interest. Still, I think a tool like this is an excellent way to show people the effect of nuclear weapons. For me, it was a starting point to learn more about nuclear weapons.

First I read up on how nuclear weapons work on the nuclear weapon archive. The formatting is a bit awkward, but it seems to contain the collected knowledge about nuclear weapons. By the way, the secrecy of nuclear weapons is not so much about the physics as the engineering involved. Did you know you can actually buy uranium ore from Amazon?
There are also a lot of videos on Youtube. Some are just a collection of explosions, others are the official military reports from the different test series that have been conducted. Especially interesting are the ones about operation Crossroads (the first nuclear tests after the war) and operation Ivy (the first hydrogen bomb). The latter brushes a bit over the fact that the bomb was 250% stronger than expected and that it wiped out a whole island and caused life threatening fallout on islands 100 miles away.
Update: The reason that I specifically mention these two tests is that they give a nice view of the time. Operation Crossroads was the first test after the Second World War and the video shows how little was known about the effects of nuclear weapons. Ivy Mike was the first thermonuclear weapon tested and the video shows the high expectations of this new type of device. I do need to correct the “brushing over facts” statement. The video clearly shows that the island was blown away. The explosion also had the expected size (although on the high end). I confused Ivy Mike with the later Castle Bravo test, which was indeed 250% stronger than expected and resulted in fallout on islands 100 miles away.

The reason to write this blog post was however because I was reading The Effects of Nuclear War, a report published in 1979. It describes the apocalypse in a matter-of-fact way. Here is for example a description of the short term effects of a limited nuclear attack on major US oil refineries:

The reports gets a bit bizarre when it describes the long term effects:

More people would walk or bicycle, increasing exercise. Reduced consumption of meat would reduce dietary fats, heart attacks, and strokes.
(…)
Many people say that the United States would be better off if it was less dependent on cars and petroleum. While changing to new patterns of living via nuclear attack would minimize political problems of deciding to change, it would maximize the difficulties of transition.

Are you f*cking kidding me? There are 3 million people dead and the country is in ruins, but hey, biking is healthy! And without the need to break the political gridlock in Washington D.C.! I bet Greenpeace would be proud.

An imponderable is the psychological impact. The United States has never suffered the loss of millions of people, and it is unlikely that the survivors would simply take it in stride. The suffering experienced by the South in the decade after 1860 provides the nearest analogy, and a case can be made that these effects took a century to wear off.

As long as you don’t forget your bicycle helmet.

The report also describes an attack of the US on the USSR. There are some legitimate differences, such as the proximity of targets to cities. But how would the population fare?

Would Soviet shelterers be better off than their American counterparts? They have several advantages. They are more accustomed to crowding and austerity than are Americans, so would probably suffer less “shelter shock”. They would be more accustomed to following Government orders, so to the extent that orders proved correct and were correctly implemented, they would be more evenly distributed among shelters.
(…)
People in hasty shelters, if they could be built, would face worse health problems, despite the legendary ability of Russians to endure hardships.

It reminds me of the scene in Dr. Strangelove where General Buck Turgidson talks about the bravery of the Russian soldiers in the Second World War.

“Joking” aside, the report does go into some detail of describing the effects of an attack. Or rather, it describes the variables and unknowns. Here are some interesting tidbits:

You see, I did some light summer reading.

I’m part of a generation who grew up mostly after the Cold War. (2) I considered nuclear weapons to be bombs. Large bombs, but still bombs. Reading The Effects of Nuclear War, however surreal, brings home the point that they are not: they are extremely large bombs with very nasty side effects. A tool like Nukemap illustrates this effectively.

At the end of the day, my interest is not really in the effects of nuclear bombs in terms of casualties but more how it affected society. How did people perceive nuclear weapons after the first ones had exploded? The Restricted Data Blog has a collected some newspapers of the days after the first one exploded in Hiroshima. The blog contains a lot of interesting material and I recommend giving it a look.

Is there any way to end this blog post on a positive note? Well, we survived the madness of the Cold War. Still depressed? Here is a comic about a dog.

(1) I do know some Serbs who, as little kids, had to hide in shelters during the NATO attacks in the late ’90s. Without exception they are friendly people, but they do have a bit of grudge against NATO. I can’t deny them that. ↩

(2) I’m from 1983. My only recollection of the fall of the wall/German reunification is the fireworks. I remember thinking “silly Germans, why is there fireworks when it is not New Years Eve?”. ↩