In my ongoing effort to explain to people who are not used to continental-European and/or religious holidays, I’m going to explain the Easter holidays. I’m not a Christian so there may be some inaccuracies (unintentional or not) in the story. If you are easily offended, you may want to read something else.

The story starts 2000 or so years ago in Jeruzalem. The Romans had occupied Judea and their policy was clear: if you are with us, we treat you badly, and when you are against us, we kill you. This policy lives on at United Airlines. The prefect of the region at the time was Pontius Pilot who probably had a side-job at that airline.

The people of Judea were not entirely happy. One of the beliefs of Judaism is that at some point a Messiah will come and save peoples souls, or something. People longed for some relief and left and right people showed up saying they were the Messiah. In many cases they were harmless fouls, but some managed to get quite a following. One of the latter category was a carpenter who went by the name of Jesus Christ. Jesus was not so much of a problem while he was making tables and chairs in some stupid village away from the masses, but then he decided to go to Jeruzalem.

The problem of rabble-rousers with a following is that you can’t easily kill them. The Romans would need at least some “evidence” to convict him for something. Luckily (for the Romans), one of Jesus’ disciples, a guy named Judas, came forward and in exchange for 30 silver coins he betrayed Jezus. Jezus was arrested for claiming to be a king and therefore questioning the Roman occupation. Then the story becomes a bit unclear. The Bible sort of suggests that Pontius P. was reluctant to sentence Jezus because it would cause unrest. He decided to ask the people to choose who should be sentenced: Jesus Barabbas (a murderer) or Jesus Christ (a loud-mouth). The people (read: the Jews) chose Christ. (While checking references I found that, confusingly, the first name of Barabbas was also Jesus).

This part of the story is quite controversial. After Jesus’ death the movement continued to grow and spread to Rome. At first the Christians were persecuted and thrown before lions. Later the Emperor Constantine was converted to Christianity. Until then Christianity was a religion without much of a structure. State support inevitably added bureaucracy and the need to agree on the stories. The result of this was the Bible. The Bible was not meant as an accurate telling of history, but as a political document that suited the rulers of the time. There were no women present (other than some prostitutes, probably) so they were conveniently reduced to a place were they couldn’t share in power (the kitchen). The Romans also had to decide who killed Jesus: the Romans or… somebody else? Spoiler alert: the Romans didn’t blame themselves. Blaming the death of Jesus on the Jews resulted in rampant anti-semitism in the last centuries and is still visible today.

In any case, Jesus was convicted and sentenced to death. Because European pharma companies were opposed to using their medicines for execution, it was done by crucifixion (which is actually a terrible way to die). They were also out of trucks or donkeys or whatever and Jesus had to carry his own cross through the streets to the place of execution. There he was nailed to it and died while singing always look on the bright side of life. After Jesus died he was buried in some cave. It is a bit weird to call this burying because that would imply he is underneath something (presumable some sand), but this is not the weirdest part of this story. A few days later some people went to the cave, opened it… and it turned out to be empty! First question: why would they go to the cave? Second question: why would they open it? Third question: where did Jesus go? Did they enter the right cave into their GPS? Did somebody pull a prank? No, Jesus must have resurrected. And with that Christianity was born.

The interesting thing is that everybody thinks Christmas is the most important Christian holiday, but it isn’t. Without the resurrection-bit Jesus would be just another Messiah who died prematurely. Christmas is a prequel added later on. Like the Star Wars prequels it has a lousy story and bad special effects. The importance of the crucifixion lives on in the cross that Christians wear. It makes you wonder, if Jesus had been poisoned, would everybody wear an Erlenmeyer?

How is this “celebrated” nowadays? The Table below gives some names for the various days (see also this blog post). In churches Easter is part of Holy Week. Palm Sunday (the week before Easter) is the day Jesus walked into Jeruzalem. People apparently waved with palm leaves, possibly for religious reasons, possibly just because it was hot. On Wednesday Jesus was betrayed by Judas. On Thursday he had his last supper (although he didn’t know that yet). Wikipedia doesn’t say when Jesus was arrested, but on Friday he is tried and executed. That is some quick justice. The day is called Good Friday, but the reason for that is not entirely clear to me. In some places this is commemorated by carrying crosses through the streets. In the Netherlands there are performances of the John/Matthew Passion by Bach. I thought Good Friday was a standard day off, but that turns out not to be the case, as I found out halfway the day. On Black Saturday all the shops have massive discounts (or am I confusing it with something else?). It is also the day Jesus was buried in a cave. On Easter Sunday Jesus resurrected. In the Netherlands (and in some other European countries) we have Second Easter day. This is to recover from eating too many Easter eggs and to do some furniture shopping. This is always a day off. 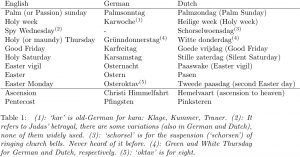 Of course, this all could be bullshit. In the same way that Christmas is really the old pagan festival to celebrate the shortest day of the year (off by a few days because the Christians were too busy persecuting astronomers), Easter is really the pagan celebration that winter is over.

There are no references to Easter eggs in the Bible. The eggs are the result of Lent. Lent is a fasting period that starts 40 days before Easter (which is preceded by Carnival (also not in the Bible)). People are not allowed to eat eggs during Lent, but chickens still lay eggs. At the end of Lent there is a massive amount of eggs that have to be eaten.

The Easter bunny, which may be a rabbit or a hare, was said to bring the eggs to children, but only if they behaved good. People also thought that rabbits/hares could reproduce without losing their virginity (which makes you wonder where the saying “they breed like rabbits” comes from), which makes an association to the Virgin Mary (the virgin part, not the breeding part).

There are two more holidays associated with Easter. The first is Ascension day, forty days after Easter. The disciples find zombie-Jezus who promptly decides to leave them again and go to heaven. Ascension day is always a Thursday and always a free day. Many people take the Friday off as well. Ten days later on Pentecost (or Whitsun) the Holy Spirit descends back to earth. This is always on a Sunday. To recover from this shocking event the Monday is a day off as well.